Now, you may know that I am a PGA Tour Golf fan and you may also know that Tiger Woods has been doing very well recently.  And that got me thinking, in July of 2011, Tiger dropped his long time caddie Steve Williams So I thought about making a quick (mini) Excel dashboard.

Do you think Steve Williams wishes he was still with Tiger Woods?  We can’t answer that for sure, but we can see how Steve Williams is doing earnings wise.

So as of the split date back in 2011, here is how much Steve has had to work with Adam Scott and how much he would have worked with Tiger Woods.  Also, there is data for the number of Wins that Adam Scott has had versus Tiger Woods as well as their earnings for each year.  Finally, there are 2 estimates on how much Steve Williams would have made as the Caddie of Tiger Woods and Adam Scott in a conservative estimate of 5% and a more realistic number based on PGA estimates of 10% of Wins, 7% of Top 10 Finishes and 5% of other winnings.

The Excel data table is easy enough to read, but most people get lost in all the numbers.  Here is an Excel Mini-Dashboard of the same data.  Lets see what pops out at us. 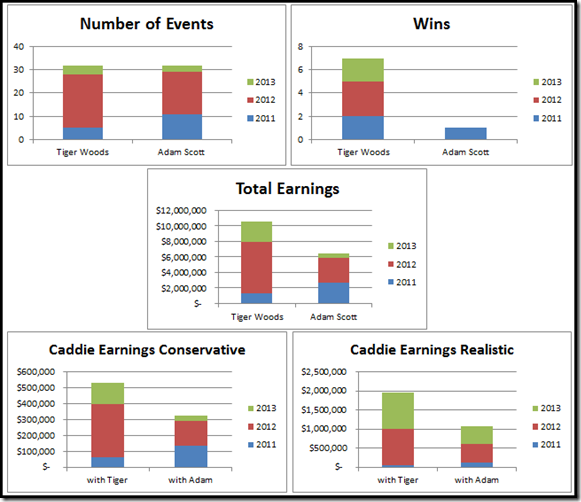 As I look at the chart, it would appear that Steve Williams would have been very happy in 2011 because Adam Scott earned more than two times as much as Tiger Woods did in the last half of 2011.  You can see this in the Total Earnings chart in the bottom data blocks.  But he had to work twice as hard for the money and his player (Adam Scott) kept placing well, but didn’t win as much as Tiger.  You can see this on the top 2 charts.  These statistics translated to greater earnings for Steve Williams in 2011 by working with Adam Scott in the last half of the season versus if he was still Tiger Woods’ caddie.

However, that has all changed.  And with Tiger’s wining streak for the last year and a half, Steve Williams may wish that he was still with Tiger.  Adam Scott hasn’t done much over that time.  He would have had to work as much as he would have with Tiger, but Adam has no victories and his overall earnings have almost been cut in half.

So things looked good for Steve Williams right out of the gate with his new caddie job, but Tiger has changed his swing and is almost back on top.

Now after creating this mini-dashboard in Excel, there are a few things that I don’t like about it.  I will put out another post on this, but what do you think could have been done better or could be confusing to the reader?

Let me know in the comments and see how your ideas compare with mine in the future post.